Last June, I went to India for two weeks to visit my father. He lives in Mumbai, but we traveled to Delhi for some sightseeing. While in Delhi, we stopped at an ATM so I could get some money. While I was walking to the ATM, I heard a strange ruckus in the trees. It was like no sound I had ever heard, so I paused and much to my astonishment, a couple of monkeys fell out of the tree! Well, this was about the coolest thing I had even seen! Monkeys — falling out of trees — in a big city — outside an ATM — right in front of me! So I grabbed my phone and started snapping some pictures. But the one biggest monkey must not have liked that, or he didn’t like me (maybe because I was looking at him — eye contact bad???) because he charged toward me. Well, that scared me stiff!  I couldn’t move! The he appeared to relax, so like a dummy, I started taking more pictures.  He charged at me again, a little more aggressively. Our tour guide was practically hiding behind a pole and he said to me, “Renée, you’d best come here.” I wasn’t sure how to do that. I was afraid to turn my back on the monkey, but I couldn’t stand there, rooted to the ground, staring at him. I backed up slowly and managed to stay safe. I was quite nervous walking back to the car after hitting up the ATM, though!

While traveling in the mountains near Lonavala later in my trip, we came across more monkeys sitting on a bridge. A man was selling bags of peanuts that we could feed to the monkeys. May dad’s driver, Ahmed, got out of the car and bought some peanuts to feed to the monkeys. He coaxed me out of the car to feed them, too, despite my recent encounter with an aggressive monkey. He told me, “Don’t be afraid. These are Mumbai monkeys. They are nice. They are not mean like Delhi monkeys.” Of course, I fell for that because I fed some peanuts to those monkeys, which was one of the best memories I have of that trip!

Now we have a standing joke in my family about “Delhi monkeys” and “Mumbai monkeys”. I’ll never live any of that down, and I love it! 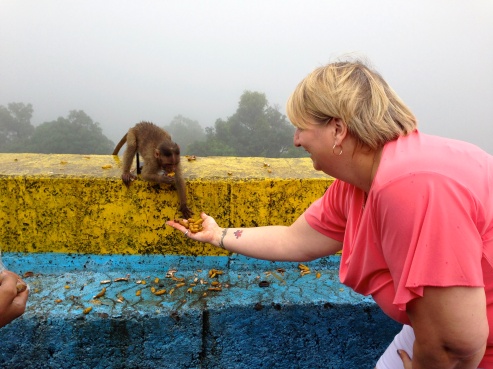 Me feeding a friendly Mumbai monkey. 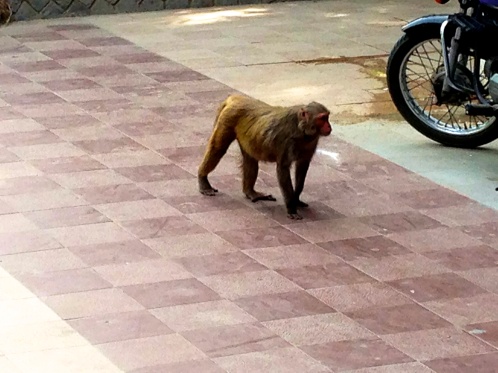 The mean Delhi monkey that charged me.