Today I ran my very first half marathon. My official time was 2:56.17; I had said I wanted to run it in 2:59.59, so I beat the goal I had for myself. I am still on a high from this. I don’t anticipate coming down for quite a while.

With Peter and Michael before the race.

Ever since I watched my cousin Peter run a half marathon, I wanted to do it. I tried to train once or twice in years past, but never even came close. I had all sorts of issues with my shins, and honestly, I simply didn’t have the mental chops it takes. I knew I had what it took at the beginning of this year, but I got injured which sidelined my training for a half I wanted to run in May. I really was chomping at the bit to do a half this year, but I was so nervous about the Chicago Half because they had a minimum 12 minute/mile average pace requirement (they changed that minimum pace requirement about 2 or 3 weeks before the race to a 16 minute/mile average pace, which was a saving grace for me, as my average pace today ended up being more than the 13 minute/mile). But I signed up for it. And I did it. And I didn’t come in last.

The weirdest thing I saw was around mile 2 or so. I passed a guy (and yes, he was wearing a race bib so he wasn’t some random Chicago guy) who was walking barefoot, watching a movie on his phone. I knew at the very least I could beat this guy for sure.

Running on Lake Shore Drive is pretty cool. The road is pretty severely banked in some places, though, which wreaked havoc on my shins, knees, and hips.

I felt pretty good through most of the race. I started to feel the miles around mile 7 or 8. By the time I hit the last 2 miles, I was struggling. The mental part of those last two miles was way harder than the physical part. I was constantly telling myself, “Step. Step. Step. Move forward. Move forward. Move forward.” I was also fighting back tears, which would have resulted in a guaranteed fail. So I kept those at bay because I knew what they would do to me.

Yes, I was hurting. I was hurting in ways I’ve never hurt before when running. But I wasn’t concerned by the pain. I had long ago accepted that there is pain in long runs, so the pain and the exhaustion weren’t my battles; it was the mental fortitude. 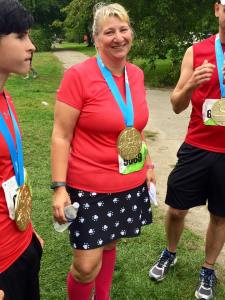 Every part of my lower body hurts. The tips of my toes. My feet. My ankles. My shins. My calves. My knees. My thighs, front and back. My IT band is surely screaming as is my hip. Both sides. My rear end. And I love love love it. Badges of honor. It’s funny how my 10 miles run last week left me tired and a little sore but add 3 more miles on to that 10 and suddenly my body starts to fall apart like the Blues Brothers car!

My body after this race 🙂
(Photo URLhttp://www.geeksofdoom.com/GoD/img/2015/06/The-Blues-Brothers-Chicago.jpg)

This was an experience of a lifetime. I don’t have many things on my bucket list. But this was one of them.

And to the person who many years ago told me I couldn’t run a half because I wasn’t “built like a runner”, well I might just have to smack you with my humongous Chicago Half Marathon finishers’ medal.

1 Response to Chicago Half Marathon