A friend of mine posted this article on Facebook this morning, and I received a related article, too.   It outlines the horrible abuse taking place in an assisted living facility.  The residents, mentally and physically disabled young adults, endured being locked in a closet with with a steel door, being immobilized by wrestling take-downs and use of pressure points, and being drugged into submission.  The event that finally finally caused this whole thing to bubble over was the rape of a 26 year old female resident who has autism and is cognitively impaired.  This ALF (assisted living facility) had been recognized since opening in 2005 as being one shitty provider of care for the most vulnerable people in the world — people without the ability to care for themselves, people who are wholly dependent on others to take care of them.

Before I get to the main point I want to make, let me address a couple other things first.  I have a little knowledge about this since I have two uncles who are developmentally disabled and live in a group home (ALF).  I admit, I am not one of their primary caregivers and I don’t get to their house nearly as often as I would like or should get there.  But I speak with my mother and my aunts and uncle and cousins who have more involvement with them so I have an understanding of what my uncles’ lives are like.  Overall, they live in a good ALF.  They are well cared for and have good food to eat and seem generally happy and healthy.  However, that is not to say that there have not been times where things were amiss.  Fortunately, my uncles have a large network of family who looks out for them and takes care of them and isn’t afraid to make a lot of noise to ensure their care.  My uncles will always have someone from outside the ALF checking on their well being.  Interestingly enough, the young woman mentioned in the article who was raped also has family looking out for her, but yet the abuse still happened.  If abuse and neglect can happen to people in ALFs who have family watching over them, imagine what kind of abuse and neglect can be inflicted upon those residents who have no family and are wards of the state.  Part of me hopes you have a vivid imagination, because whatever horrible scenarios you can dream up are probably someone’s reality.

One other point I’d like to make is an answer to a question that maybe you are asking yourself in your mind: if a family member is a resident in an ALF and being abused or neglected, why don’t you just remove that person from the abusive situation and take care of him or her yourself?  Ahh, if only it were that easy….  Every situation is different, and often people live in ALFs for a reason; they need very specialized and intensive care that can simply be too much for one person to take on physically, emotionally, mentally, and/or financially.  ALFs provide the care needed and also can offer meaningful social interactions and experiences.  My uncles call their ALF their home.  They have their own things in their own room.  They live with other residents and they watch movies together and visit other homes together.  They help do things like set the table for meals and put their clothes away in their dressers.  They love visiting their family on holidays and for outings, but they also like to return home after that, just as anyone else does.  Residents of ALFs are there because they are getting all of those needs met and having experiences that for various reason they would not be able to have living at home with parents or other family members.  There are health and safety issues that need to be addressed, and sometimes those responsibilities are overwhelming so an ALF can be a great option.  However, it is not easy to find an ALF.  Many people don’t want them in their neighborhoods (my uncles’ home is kind of out in the middle of nowhere, for instance).  People often confuse mentally disabled with mentally ill, and then make the ill-informed leap that mentally ill means means violent and dangerous, so they don’t want “those kinds of people” in their neighborhoods.  Sometimes ALFs get denied because people don’t like they way “those people” look or act.  I won’t even dignify those shallow, narrow-minded dumbasses with anymore writing about them.  Sometimes zoning laws prevent ALFs.  Houses in subdivisions are supposed to be single family dwellings and they say group homes are not single family so they are disallowed.  I won’t talk about homes where people have a friend living with them or when a family has other members living with them, like maybe a married child and his or her spouse, or elderly parents.  Those sound like extended families to me, not single families, but what do I know.  ALFs are hard to come by and there is more demand than supply for them.  Yanking someone from an ALF can mean a tough time getting that person back into one, if it happens at all.

Now, to my main point.  Sadly, abuse and neglect happen in ALFs.  Not all of them.  Not all the time.  But it does exist.  In the case of this facility mentioned in the article, the following things were done to try to stop the neglect and abuse happening there:

Are you wondering how all this could have taken place since the opening of this home in 2005, and even after having its license revoked, the facility is still open and running?  I call it the Joe Paterno Effect.  It’s the ridiculous notion that following proper channels means you’ve done your job and you are now free and clear of any further responsibility.  Maybe it’s too narrow to call it the Joe Paterno Effect since more than one person at Penn State followed protocol and ended there in regards to reporting Sandusky’s abuses, but Paterno has become the name and face for that set of horrors, so I’m using it here.  Just “doing your job” isn’t enough.  I’m sure everyone mentioned in those bullet points felt they did their job — they reported abuse to the proper agency.  Fines were imposed.  Federal aid dollars were denied.  Licenses were revoked.  All the proper channels followed.  And a woman was raped as a result of following the proper channels. 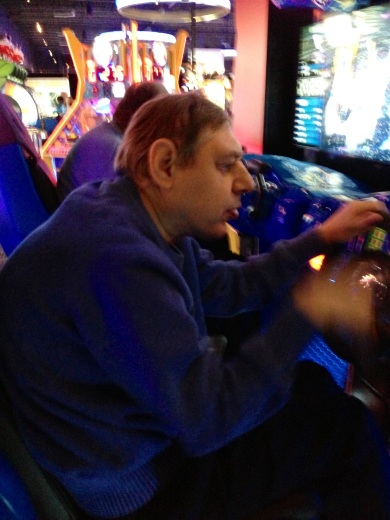 My uncle Jimmy playing games at Dave & Busters last year at a Christmas party for the residents of his home and their families.

Don’t “do your job” and absolve yourself of further responsibility or involvement.  Follow up.  Talk to more agencies and more advocacy groups and more reporters and medical professionals and media outlets and your friends, family, and neighbors.  Tell everyone about what you know is happening to these people.  Go to the home and check on the residents.  Take pictures.  Write things down.  Make noise and continue to make noise until you are heard and the abuse stops.  Don’t make your phone call to the 800 number and stop.  Don’t send your email or fill out the proper form and stop.  IT’S NOT ENOUGH!  Every day a place like this is allowed to stay open is another day of horrors for a resident there.

My uncle Joey playing Guitar Hero at Dave & Busters last Christmas at a party for the residents of his home and their families.

I have opinions and I have passions and I like to write.
View all posts by renbog →
This entry was posted in Rants, Social Issues. Bookmark the permalink.

3 Responses to The Joe Paterno Effect