Running the Chicago Marathon was such a momentous event for me, that everything I want to say will need to be broken up into more than one post! So this post will just focus on the experience of running a marathon! 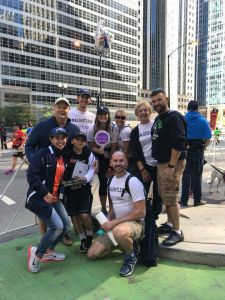 I wasn’t nervous at all as I stood in corral L — the very last corral. I was certain I’d be a bundle of nerves since I was a wreck in the days leading up to the race. I think I wasn’t nervous because I just wanted to do this thing, get it started, see what happened. Once I crossed that start line, I just let my body do what it knew how to do — run. This allowed me to be able to enjoy the course.

The first half of the course was easy and so much fun! There were so many people around me, running, and so many people on the side of the streets cheering, it was easy to get lost in the activity around me and not think about the running. I read the signs, I high fived kids who had their hands out, I smiled and waved at people who called out my name and encouraged me or who saw that I was running with Team in Training and called out, “Go team!”

Front of my shirt

Back of my shirt

I had zero doubts about finishing because I felt so good. Even the pains I had had on training runs didn’t come — like the back pain that always seemed to start around mile 8 – 10 or the twinges in my knees that are always present. None of that existed, or if it did, it was barely noticeable. I was feeling so, so, so fantastic! I loved running past Lincoln Park Zoo. I loved seeing the drag queens in Boys Town and all the guys cheering on the sidewalks there! I loved the Elvis impersonator I passed. The aid stations were like a block party! All the volunteers there were cheering and positive and fun! It was a bevy of activity at those aid stations! I was having so much FUN!

Then the pace car was there at my side.

I was about halfway through the race, and I was about to be behind the pace car. At first, I didn’t panic because I seemed to be able to stay pretty close to it even though I was behind it. But as I got to aid station 10 — there are 20 stations — this is what I saw: some young kid was at the Gatorade table, which was stacked with full cups of Gatorade, and I heard him say, “Are you ready?” And then he tipped the table and all the cups of Gatorade went to the ground. It was the moment I became filled with overwhelming doubt. I realized that I was about to lose all my aid stations for the rest of the race. I expected to lose them, but not this soon. It was close to 80 degrees and I did have Gatorade with me and my cheering crew had more Gatorade and water with them for me, but it wasn’t enough to make me feel confident that I could finish anymore. Now the running was hard labor. This was not fun anymore.

To make matters worse, I had a plan to fuel every five miles, but I hit a big glitch with that plan. Right after crossing the start line, you run through a big tunnel that goes under Randolph Street (I believe that’s the street). While there, I felt my GPS watch vibrate and I looked at it to see it had autopaused because it couldn’t find a signal. It autoresumed when I came out, but it kept pausing and resuming in the city because the skyscrapers interfere with the signal. So my watch was worthless to determine pace and mileage. But I decided early on it was NBD — I had the signs that marked the miles. Well, guess what? Once the pace car comes through, they start to take down the signs on the course, too, so now I had no idea how many miles I had come or how many miles I had left to go. Every now and then, I;d come across a kilometer marking sign, but I didn’t know how many kilometers there were in a marathon (I know now — 42), and I was too tired to do math conversions in my head. I felt lost.

My angels started appearing around miles 16, 17, 18, 20. My friend Emily, who has run the marathon before and has an uncanny total recall of the course, started walking with me. Yes, walking. I was now doing more walking than running, I was so tired and demoralized. Eventually, my daughter and my cousin also started walking with me, and finally my husband joined me, too. I had my own little posse of positivity — cheering me up, encouraging me, carrying my water, soaking my sponge so I could cool off, getting me ice and water and Coke. They became instrumental in my race — not only were they providing me immense mental support, but they became my traveling aid station.

With a few miles to go, I ended up being accompanied by two of my coaches from Team in Training, and they were two more angels. Mark was wearing an Elvis wig and kept my mind busy with his conversation and his jokes. Jeff came along and gave me great visuals about finishing the race. “Do you know how many kilometers there are in a marathon? 42. We just passed 41. Do you know how much you have left to do? Have you ever run on a track? You only have three laps left to go on the track, Renee. Can you do three laps? Now you’re down to two laps. You can do two laps, can’t you? Now you’re at the last lap. This one you’re going to do on your own. You just turn right at the corner up there, and then turn left and you’ll see the finish line. You earned the right to finish this race on your own. You earned it. Go get it.”

Me with my two angels — coaches from TNT!

And then all my angels fell back — Emily, Becky, Robyn, Jim, Mark, and Jeff. My cheering crew were there, too, and I could hear them all cheering for me as I turned to head up Mount Roosevelt — Aunt Carol, Joe, Lucy, Ethan, Peter, Dallas, Ben — all these people who had go so far above and beyond just to cheer for me and support me — it was so emotional.

I headed up Roosevelt with a smile on my face and holding back the tears. 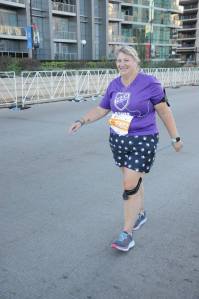 When I turned to my left and saw the finish line, literally all the pain and fear and doubt simply melted away and I sprinted as hard and as fast as I could to that finish line. I stepped on the timing mat at the finish line with a huge smile, and then the next step opened the floodgates and I began sobbing.

At the finish line, I was met by my friends Larry and Cathy, who I did not expect to be there. They have been among my biggest, most loving supporters of my training for this race, and when I saw Larry, I collapsed on him in full tilt ugly cry. Then I flung myself onto Cathy and continued my sobbing. I hope they could feel the pure love I had for them at the moment — but I’m sure all they wanted was my stinky, sweaty body off of them 🙂 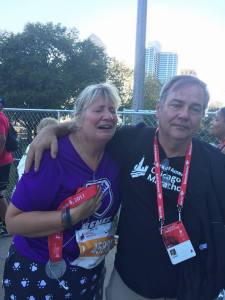 It has been 4 days since I ran the Chicago Marathon, and I am still riding on such am amazing high. I want to tell everyone about it (You know the joke — How do you know if someone has run a marathon? Don’t worry, they will tell you! Yeah, that’s me!).

I’ve been fortunate enough to have some truly remarkable experiences in my life — I’ve been to Paris, India, and Dubai. I’ve hiked in the Grand Canyon. I’ve been to Disneyland and Disneyworld more than once. All incredibly memorable. And this Chicago Marathon experience goes right into the same category as those trips — amazing, surreal, and so unforgettable.

7 Responses to Marathon Recap 1: My Story