I am more determined than ever to run a 5K.  It is amazing what a little taste of success will do for a person!  Since running my mile last week on Tuesday and Thursday, I find myself feeling confident in my potential.

Today I decided to push myself a little bit.  Instead of running my mile, I decided to try to push it to a mile and a half.  I hadn’t run since Tuesday, so I was feeling that a little as I started.  My calves really started to cramp up.  I could hear one part of my brain saying, “This hurts.  It’s too hard.  Just stop and walk and try to run again tomorrow or Sunday.  It’s okay to not run today.  It’s been a few days.  Your calves hurt.  Just walk.”  I could also hear the other part of my brain saying, “Just keep running through the pain, Renée. 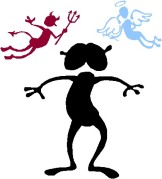 You’ve had this pain before.  You’re not injuring yourself.  You know it will go away.  You’re just being lazy and making excuses.  If you want to be a runner, you have to keep running.  Ignore the pain.  Listen to your music.”  It was like the devil and the angel on my shoulder, each tempting me to do one thing.  I really wanted to listen to the devil, but I knew the angel was making sense so I kept on running.

I finished my mile and a half.  What a freaking confidence boost!

I wanted to keep going, but I feared I would push myself too hard, so I walked for the next half mile.

When I hit mile 2, I decided to run another half mile.  I wanted to do another full mile, but again, I didn’t want to push myself to the point where I could be risking injury, so I help myself to that half mile.

I walked my last half mile.

It was during that last half mile that I told myself I was absolutely capable of this.  I was already formulating plans in my mind on how to get more running in during the week so I could COMMIT to a 5K on December 14.  My friend Emily works for Ottawa Elementary Schools, and they are holding their very first 5K in December.  Last week I was thinking of maybe doing it.  Today, I decided I AM doing it. (Interested?  Here’s a link: http://oes141.eventbrite.com/)

I always knew that the mental aspect of any physical activity was significant, but I am discovering for myself just how truly significant it really is.  I have to work unbelievably hard to push the negative, “Give it up,” thoughts out of my head and stay focused on the positive, “You’ve done this before, you can do it again,” thoughts.