Do What You Can with What You Have

Today, we stopped at McDonald’s for lunch. We came back to the car to eat while Ahmed ran inside to get some food for himself. While we were eating, a little girl of maybe age 7 came up to the windows with a toddler in her arms wanting food. None of us could eat our lunch in good faith with hungry kids staring at us through the window. We all ate a few bites of our sandwiches and fries and took a sip off our drinks then handed them out the window to the girl who shared the food with the toddler she had in her arms. Some other kids came over by her and she shared wit them, too. It wasn’t a lot of food, but it was all we had at the moment. When Ahmed came back to the car, he had no idea we had given food to the kids. One little boy came up to him and he handed over the rest of his drink to the boy. This really warmed my heart because Ahmed certainly isn’t rich by any stretch of the imagination, but he knew this little boy needed the drink more than he did. More striking to me that he did this is because my father explained to me that many Indians can be quite cruel to other Indians, mostly related to the caste system that is technically illegal but still exists in the form of social strata. Ahmed went against what might be typically expected of Indians. I also recognized that we did what we often do not do at home. Be honest: how many times have we seen someone panhandling and we give nothing, and in fact, might even curl our lips a little at that person? I’m sure we all have, myself included. We could have ignored those kids, but we didn’t. We did what we could with what we had.

After dinner, we saw a very skinny dog. Truth be told, lots of the street dogs you see here don’t appear to be starving. They seem to be pretty street-savvy scavengers. Not that it isn’t sad to see so many homeless dogs, but this pup looked particularly skinny. When we got back to the apartment, Brenda said, “We are going back to find that dog.” She grabbed her dog food and dog treats and led me and my dad out the door. We found that dog and gave him food and treats as well as at least a half dozen other dogs tonight. We didn’t have enough food to give each dog his or her fill. We didn’t have enough food to feed all the homeless dogs. But we did what we could with what we had.

One thing I have learned here is that the needs of many people and animals are great, overwhelming to be honest. When you see so many people, children, animals in such great need and feel overwhelmed, sometimes the easiest thing to do is nothing because there is no way you can solve the problems. But doing nothing just contributes to the problem. So do what you can with what you have. I won’t ever forget the sight of those kids eating McDonald’s on the side of the road or that skinny, skittish puppy eating dog food off the ground. But I can ease a bit of the ache inside by knowing all of us today did what we could with what we had. 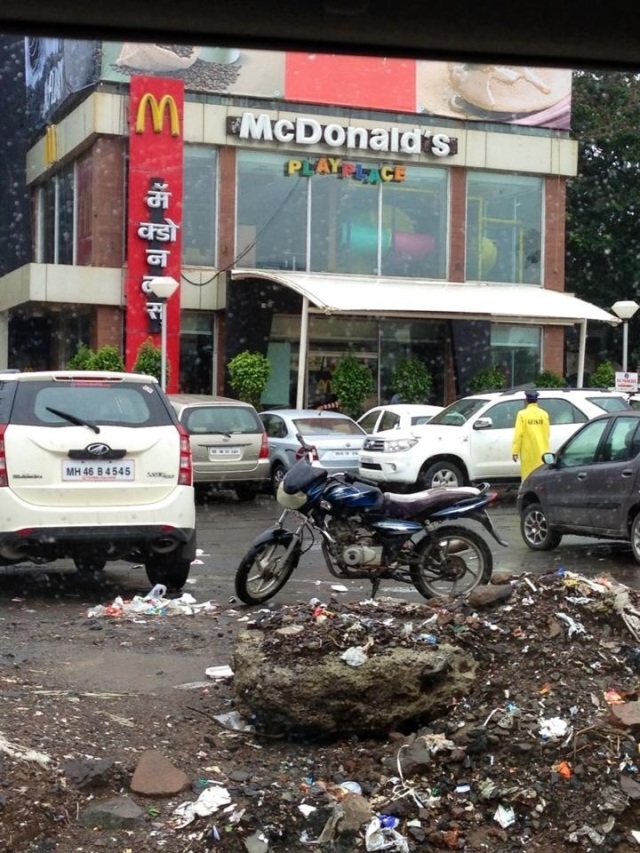 The McDonald’s where we shared our lunches with some hungry children.

I have opinions and I have passions and I like to write.
View all posts by renbog →
This entry was posted in India 2013. Bookmark the permalink.